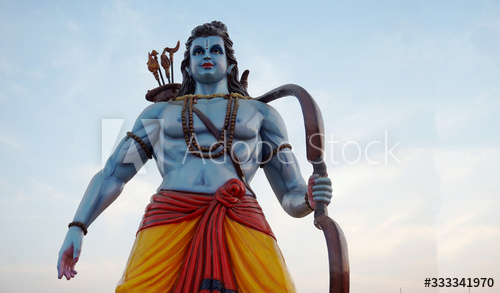 Rama Navami is a spring festival celebrating Lord Rama’s birthday during the springtime. It is particularly important to the Hindu tradition of Vaishnavism, as the seventh avatar of Vishnu. The festival is in celebration of the descent of Vishnu as the avatar of Rama, through his birth with King Dasharatha and Queen Kausalya in Ayodhya, India. The festival is part of the Navratri spring and is celebrated on the ninth day of the Shining Half (Shukla Paksha) in the Hindu calendar month of Chaitra. This generally occurs in the Gregorian months of March or April of each year. Rama Navami is an optional government holiday which depends on the institution you are working with.

The day is marked by Rama Katha recitals or reading of Rama stories as a mark of their devotion to the lord. Ramayana and Mahabharata are considered Itihasa or legends by Indian traditions. Some Vaishnava Hindus visit a temple, others pray inside their home, and some participate in a bhajan or kirtan with ram Katha recitals with music as part of puja or aarti. Some devotees mark the event by taking miniature statues of the little Rama, washing and dressing him, then placing him in a crib. Charity events and community meals are also organized. The festival is an occasion for moral reflection for many Hindus. Some mark this day by vrata or fasting for an entire day.

Important celebrations on this day take place in Ayodhya and Sita Samahit Sthal (Uttar Pradesh), Sitamarhi (Bihar), Janakpurdham (Nepal), Bhadrachalam (Telangana), Kodandarama Temple, Vontimitta (Andhra Pradesh) and Rameswaram (Tamil Nadu). Rathayatras, the chariot processions, also known as Shobha yantras of Rama, Sita, his brother Lakshmana, and Hanuman, are brought to various places to display and shower their blessings on the general public. In Ayodhya, many bathe in the sacred Sarayu River and then visit the Rama Temple.

The day is the ninth day of Chaitra Navaratri (not to be confused with the Autumn Navratri). Celebrate the arrival of the seventh avatar of Vishnu, the god Rama. This occasion is marked with puja (devotional worship) as bhajan and kirtan, fasting and reading passages about Rama’s life. Special cities in Ramayana legends about Rama life observe important celebrations. These include Ayodhya (Uttar Pradesh), Rameswaram (Tamil Nadu), Bhadrachalam (Telangana), and Sitamarhi (Bihar). Some places also hold Rath-yantras (chariot processions), while others celebrate it as Rama and Sita’s wedding anniversary as a festival(Kalyanotsavam).

Although the festival is named after Rama, the festival includes reverence for Sita, Lakshmana, and Hanumana gave their importance in Ramayana’s history. Some Hindu Vaisnavas observe the festival in Hindu temples, others observe it within their homes. Surya, the Hindu god of the sun, is part of worship and ceremonies in some communities. Some Vaisnava communities observe the nine days of Chaitra Navaratri by remembering Rama and reading Ramayana, and some temples organize special discussion sessions at night. Charity events to help those in need and community meals are organized by Vaisnava temples and organizations, and for many Hindus, it is an occasion for moral reflection and to celebrate with their family.

In Karnataka, Sri Ramanavami is celebrated by local Mandalis (organizations) in some places, including on trails, scattering panenka (jaggery and ground melon juice) and some food. In addition, in Bangalore, Karnataka, the Sree Ramaseva Mandali, R.C.T (R.) Chamrajpet organizes a month-long classical music festival in India. The uniqueness of the 80-year-old musical extravaganza is that the celebrated Indian classical musicians, regardless of their religion, whether Carnatic and Hindustani, descend to offer their musical performance to Lord Sri Rama and the assembled audience.

The Bhadrachalam temple in Telangana is one of the main sites of Rama Navami celebration.

In the eastern states of India, such as Odisha, Jharkhand and West Bengal, the temples of Jagannath and the regional Vaishnava community observe Rama Navami and treat it as a beautiful day when preparations start for their annual Jagannath Ratha Yatra in summer.

Devotees associated with ISKCON fast during daytime hours. Several ISKCON temples presented a more prominent celebration of the holiday occasion intending to take into consideration the needs of the growing native Hindu congregation. However, it was always a grand calendar event in the traditional Gaurabda calendar with a specific added requirement for fasting by devotees of the lord.

Rama Navami is one of the Hindu festivals that celebrates the Hindu culture with roots in Uttar Pradesh, Bihar, Jharkhand, Telangana, Andhra Pradesh and Tamil Nadu. Descendants of Indian hired servants, for example, who came to colonial South Africa before 1910 to work in British-owned plantations and mines, lived after the South African apartheid regime, continued to celebrate Ram Navami by reading Ramayana and chanting bhajans from Tyagaraja and Bhadrachala Ramdas. The tradition continues in contemporary times at Durban’s Hindu temples each year.

Similarly, in Trinidad and Tobago, Guyana, Suriname, Jamaica, other Caribbean countries, Mauritius, Malaysia, Singapore, and many other countries, the Hindu descendants of colonial-era contract workers brought in by the British government from India have continued to observe Ram Navami along with his other traditional festivals.

It is also celebrated by Hindus in Fiji and Hindus from Fiji who have migrated elsewhere.