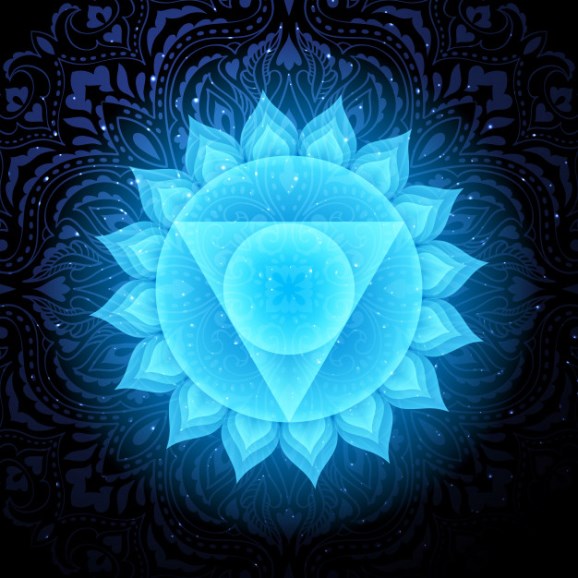 The fifth chakra is the Throat chakra which is located in the throat region. It looks after your throat, neck and thyroid. This chakra essentially helps you to find your authentic and individual voice and assists you in expressing it. Behavioural and psychological characteristics associated with this chakra can include a good sense of timing, realising your vocation and purpose and propensity to create and project ideas into reality. When the throat chakra is not working, it might lead to a lack of speech or speaking too much and inappropriately or inability to keep secrets and keep your word.

Now, let’s see for some of the basic science that one could look out for while checking the under activity of the throat chakra. We will start our analysis with the physical signs. As we all know our fifth chakra is related to our ability to hear and speak. If anyone has any problems in hearing or face ringing in the ears then this could be a very obvious sign of under activity in the throat chakra.

Coming to any other signs that might show under-activity are as follows. If you are someone who doesn’t like to tell the truth straight away and play with the other person’s mind then this could be a sign of a weak fifth chakra. Someone with a strong fifth chakra almost cannot lie which feels like living with a lie detector on your body at all times. If you are someone who holds their voice back in public, like preferring to sing in the shower rather than singing in front of an audience, then this an obvious sign of under activity. Also, if you feel really lost regarding your life’s purpose and you feel like you should be doing something which you are and doing right now then that is a sign of a weak fifth chakra. this is because your throat chakra is not only tied to your authenticity but it is also tied to this life path that emerges out of your authenticity. also, if you are someone who isn’t able to keep their word or their promises then that is a real sure sign when there is a weakness in the throat chakra. If you are someone who holds back expressing the truth just to protect others from hurting their feelings then that is a sign of weakness.

If you relate to any of the above signs then and you must work on them as the throat chakra plays a very essential role in the throat region physically while assisting your individual voice and authenticity.